I felt it was appropriate at this time, given current events, to take stock.

I was lead dramaturg, mentor and director for Omari Newton’s first play Sal Capone The Lamentable Tragedy Of which was presented at The NAC in April 2018. The play was originally developed and co-produced by Urban Ink productions and Black Theatre Workshop with development support from Playwright Workshop Montreal when I was Artistic Director at Urban Ink. It first premiered in Montreal in the fall of 2013 and Vancouver spring of 2014.

When Omari and I started working together in 2008, he had a vision to write a spoken word/theatre piece to tell the story of the shooting of a Montreal Honduran youth Fredy Villaneuva.

This was before Hamilton, so before hip hop theatre was an established genre.

For one reason or another (including funding) it took five years for us to develop the play. During this time we were discovering a new trans-disciplinary way of working which prompted us to found the Boldskool Hip hop Theatre workshop series with collaborator and educator Mia Perry. We worked with an interdisciplinary group of hip hop and theatre artists to train youth (and ourselves) in the emerging genre of hip hop theatre. Our mission was to teach the origins of hip hop, the elements of ensemble theatre and to nurture the art of collaboration as a way to channel the pain and rage emerging from youth participants in their dealings with police. We learned so much during that series working with black, Indigenous, and racialized youth in community centres, high schools, and youth detention centres across BC.

Five years after beginning our journey we worried that the play might feel irrelevant or passé. This, of course, was not the case because right before the premiere another youth, Sammy Yatim, was shot 9 times by a police officer in Toronto after being tased. The officer in that case was eventually charged and served 6 years in jail. (https://www.thestar.com/news/gta/2019/07/23/discipline-charge-dropped-against-toronto-officer-who-tasered-sammy-yatim-while-he-lay-dying.html ). Our character DJ Sam I Am (or Sammy) was shot 9 times and spends the majority of the play in a coma as his friends come to terms with their loss.  In a 'life mirrors art' reversal, our fictional story was written five years before the actual event occurred.

This was a terrifying coincidence.

When we presented the play at the NAC in Ottawa, 10 years after the first premiere  two men were arrested in a Starbucks in Philadelphia for drinking coffee...in a coffee shop. Thankfully, these two men survived the ordeal. This brought back the pain and memory of the 2016 Bridgehead coffee shop arrest and murder of Abdirahman Abdi (https://ottawacitizen.com/news/local-news/a-full-picture-of-abdirahman-abdis-final-moments-has-finally-been-painted).

As I pause here to take a breath to take it all in, it occurs to me that breathing has now become a privilege.

The other day I texted Omari to ask if he’s a prophet in disguise.

Thanks to a commission from Black Theatre Workshop, Omari and I are working on the companion piece. Black and Blue Matters which essentially puts the cop that shot our Sammy from Sal Capone on trial in an unconventional court set in limbo, is presided over by Papa Legba—the arbiter of the crossroads and purveyor of justice in Haitian/Yoruban cosmology. Many of the details that are now emerging with respect to the police officer who shot George Floyd are already story points in our play. We will be watching closely as this world’s justice plays itself out in the coming months. In the words of Bertolt Brecht, "Art is not a mirror to reflect reality, but a hammer with which to shape it."

It’s been 6 1/2 years since the premiere of Sal Capone and this play is ever more relevant. The rage amongst the youth is still very much alive.

I recently attended the rally/protest/march in Montreal that took place to show solidarity with the community in Minneapolis who are mourning the senseless murder of George Floyd. I'm still processing the mixed feelings that arose as I moved along with the crowd while trying to maintain social distance. I listened to impassioned speeches by Black, Indigenous and other POC's, and joined in the chants for justice. At times I had to stop and listen as the chants "black lives, matter, justice, peace" turned into meaningless sound bites. Like an actor, studying for a role, I had to catch myself and really consider the words I was repeating.

I share all this to say that art is vital. It really is.

Without it I would have no idea how to process my rage.

Diane Roberts is an accomplished director, dramaturge, writer and cultural animator, who has collaborated with innovative theatre visionaries and interdisciplinary artists for the past 30 years. 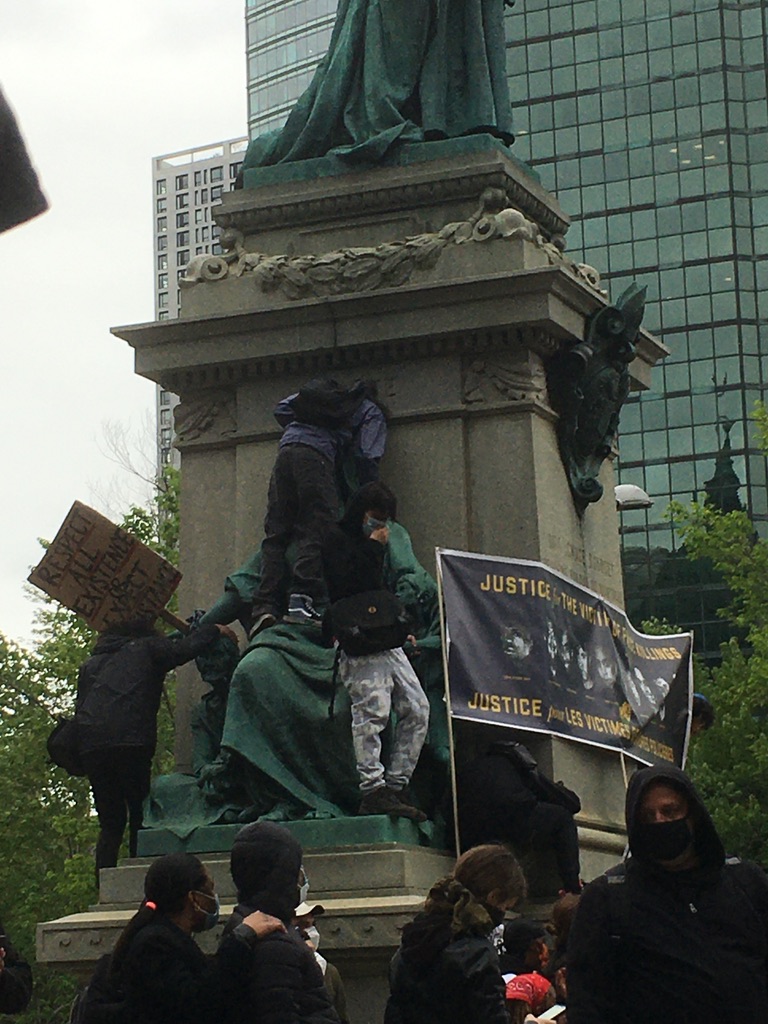 Why art is essential in helping us process the rage of injustice.

Your submission has been received!
Oops! Something went wrong while submitting the form.

GET THE LATEST FROM BOLDSKOOL!
JOIN OUR EMAIL CLUB.

Thank you! Your submission has been received!
Oops! Something went wrong while submitting the form.
INFO@BOLDSKOOLPRODUCTIONS.COM